Our research seeks to understand the fundamental, yet long mysterious, cellular mechanisms that drive chromosome dynamics during the differentiation of sex cells (gametes).

A critical feature of gamete differentiation is chromosome reduction; each gamete must contain exactly half the chromosome complement of its progenitor (parent) cell. If chromosomes fail to segregate properly during gamete formation, gametes and the offspring they generate are aneuploid (contain an improper number of chromosomes).

How are chromosome complements properly divided? At the onset of the specialized cell division cycle called meiosis, each chromosome somehow identifies and specifically associates with its homologous partner. This nuclear reorganization process culminates in paired homologous chromosomes that are joined along their lengths by a proteinaceous structure, the synaptonemal complex (SC), and each capable of undergoing crossover recombination.  Each of these steps, chromosome pairing, SC assembly (synapsis) and crossover recombination, are conserved features of meiosis that ensure accurate chromosome reduction: Together, these steps allow homologous chromosomes to orient with respect to one another and thereby segregate toward opposite spindle poles at the first meiotic division. Despite over a century of observing meiotic chromosome pairing and synapsis in diverse organisms, the molecular mechanisms that promote and coordinate these fundamental meiotic chromosomal events are still unknown. How do homologous chromosomes identify one another? How is this initial recognition between chromosomes reinforced? How is homolog recognition coordinated with SC assembly, such that synapsis occurs specifically between paired chromosomes? 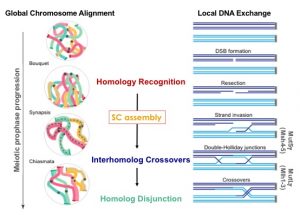 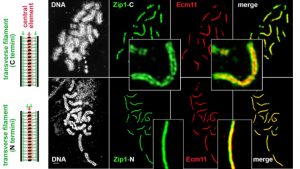 A focus that underlies many of our recent experiments has been to identify molecular partners and features of the SC transverse filament protein Zip1 that underlie its crossover-promoting and SC assembly activities. Our work in this area has demonstrated unequivocally that Zip1’s SC assembly and crossover recombination functions are independent. Furthermore, our data suggests the Zip1 coordinates its crossover-promoting and SC assembly activities through adjacent small regions within its N terminal tip.

We have furthermore established fruitful collaborations with Dr. Owen Davies at Newcastle University, and with Dr. Ishita Mukerji in our own department, to begin analyzing the structural properties of SC proteins, including Zip1 and the Ecm11-Gmc2 heterocomplex. 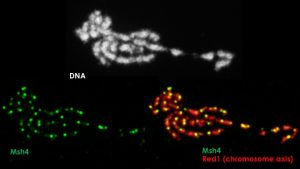 A fundamental goal of the lab’s current and future research is to understand how homologous chromosome pairing and SC assembly are coordinated with the meiotic recombination process in budding yeast. 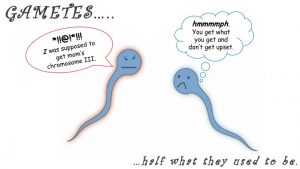