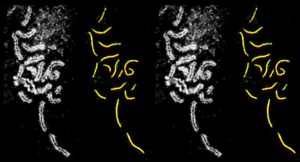 1. Factors that promote homologous chromosome synapsis in C. elegans germline nuclei: As a graduate student in Dr. Anne Villeneuve’s lab, I. identified and characterized several of the first known genes required for homologous chromosome pairing and synapsis in the nematode, elegans (chk-2, syp-1, syp-2, hal-2). I also gathered strong evidence in support of the idea that certain cis-acting chromosomal sites on each C, elegans chromosome couple homology recognition with the initiation SC assembly.

2. Factors that regulate SC assembly in budding yeast: Although it had been long appreciated that SC proteins tend to multimerize and are likely regulated to avoid unwanted structure formation in germ cell nuclei, factors that negatively regulate SC proteins such that they assemble at the right time and place were not known in any organism, until I identified such factors in budding yeast meiotic cells. As a post-doc, I initiated a genetic screen to search for proteins that negatively regulate the SC transverse filament protein, Zip1, when homologous chromosome pairing has failed to occur. My novel screen led to the identification of several proteins, including a prolyl isomerase, Fpr3, and the E3 SUMO ligase Zip3 as proteins that negatively regulate Zip1 assembly into SC structures, when homolog pairing is absent. My cytological studies furthermore revealed the surprising result that synapsis initiates predominantly from centromere locations, instead of non-centromeric sites such as chromosome arms, during early time points in meiosis.

3.  The structure and dynamics of budding yeast SC: At the time I set up my own lab at Wesleyan University, several fundamental details of the budding yeast SC architecture and assembly remained poorly understood. Zip1 was the only component whose orientation and arrangement within the mature SC had been well characterized. Furthermore, although ultrastructural studies indicate the SC consists of multiple distinct components, the only additional factor known to localize in a manner that suggested a structural role at that time was the Small Ubiquitin-like MOdifier, SUMO, a protein that is typically linked to other larger proteins. At the time, SUMO’s role in SC assembly was proposed to be through linking chromosome axes with the C termini of Zip1. We demonstrated that SUMO is indeed an essential component of the SC but that (contrary to the prevailing view) SUMO in fact localizes to the opposite end of Zip1 and away from homolog axes, at the midline of the SC structure. The findings we reported in this paper use a cutting edge light microscopy technique (Structured Illumination Microscopy) to visualize fluorescent-labeled proteins within the SC with a resolution approaching that of electron microscopy. Using this technique, our investigations also led to the discovery that the Ecm11 and Gmc2 proteins co-localize with SUMO, comprising the “central element” substructure of the budding yeast SC. This discovery represented a significant advance in our field and equipped us with new cytological markers for evaluating SC assembly. The data associated with this study comprised much of the 5th year Masters thesis research of a Wesleyan undergraduate, Louis Taylor. During our first years at Wesleyan, our lab also generated the first detailed description of the dynamics of SC protein components within the full-length budding yeast SC. We asked: is SC essentially an irreversible tether or does it have dynamic properties at steady-state? We explored the hypothesis that the SC is a static structure using inducible epitope-tagged SC components. We demonstrated that the SC is actually highly dynamic: New building block components continuously incorporate into SC even after it has reached full length. We next performed experiments to ask whether SC components exit at a rate similar to their continual incorporation, in a “treadmilling” fashion. We found that instead of undergoing substantial turnover, SC components accumulate and the SC simply grows larger as meiosis progresses. While our findings support the idea that the SC is a relatively stable tether between chromosomes, we also demonstrated that the dynamic growth of the SC allows it to remodel in a manner that can change its influence on cellular behavior. This new knowledge has influenced the way we think about the potential role of the SC as a signaling module for regulating progression through meiosis. (In addition, Aim 2 proposes to use the same methodology to ask whether SCs assembled in the absence of MutSg crossing over exhibit similar dynamics.) The data associated with this study comprised much of the 5th year Masters thesis research of Wesleyan undergraduate, Sarah Moustafa (Kilic). (Wesleyan undergraduate co-authors are in bold; ** indicates graduate student authorships.)

4. The functional relationship between SC proteins and synapsis: Two striking and tightly linked features of meiosis are 1) the assembly of an elaborate, protein-rich structure – the synaptonemal complex (SC) – at the interface of lengthwise-aligned homologous chromosomes (synapsis), and 2) crossover recombination, which ultimately provides the essential transient links between homologous chromosomes required for their proper orientation and segregation on the meiotic spindle. My lab’s research has contributed valuable insight into the roles that budding yeast SC proteins play in both promoting and constraining crossover recombination events along chromosome pairs during meiosis. The widespread link between presence of SC and MutSg-associated crossovers long fueled the idea that SC structure itself functions in promoting crossovers. We discovered that this is not true in budding yeast. First, with an interspecies complementation experiment Wesleyan undergraduates Cassie Johnston and Yashna Thappeta  examined the capacity of a Zip1 protein from an ancestrally related yeast species to carry out the roles of budding yeast Zip1. We found that K. lactis Zip1 could restore crossovers but not SC to S. cerevisiae zip1 null cells, indicating that the mature SC structure is not an essential requirement for the formation of SC (Zip1) – associated crossover recombination. Equally striking, the results we report demonstrate that the Zip1 protein, which is a major structural component of budding yeast SCs, can be altered in a manner that can restore crossovers to strains that lack the pro-crossover complex MutSg, suggesting Zip1 has a specialized and direct role in recombination. In a subsequent project, we discovered that mutants missing the SC because of an absence of the central element proteins Ecm11 or Gmc2 actually exhibit increased MutSg crossover events, rather than the deficit seen in SC-deficient mutants such as the zip1 null mutant. Furthermore, Wesleyan undergraduate Michelle Cheng identified a separation-of-function version of Zip1 that phenocopies the ecm11 mutant (in contrast to zip1 null mutant). These data unequivocally demonstrate that 1) mature SC structure is dispensable for crossing over and 2) Zip1 maintains genetically separable roles in crossing over and synapsis. The data also suggest the existence of a functional complex between Zip1’s N terminus and central element proteins, which acts to limit MutSγ-mediated crossovers. More recently, we have shifted our focus toward deepening our understanding of the dual roles of the SC transverse filament protein, Zip1, in meiotic crossing over and SC assembly. Through a detailed structure function analysis, we have discovered that these dual functions are largely controlled by adjacent domains within the first twenty residues of Zip1. We furthermore provide evidence that Zip1’s first ten residues interact with the pro-crossover and E3 SUMO ligase Zip3. Our data suggest that the adjacency between a pro-crossover region and a pro-synapsis region within Zip1’s N terminus is critically important for Zip1’s liaison function in coordinating crossovers with synapsis. These data were acquired in part through independent research by undergraduates: Cassie Johnston, Yashna Thappeta (honors thesis), Melanie Parziale (honors thesis), Savannah Morehouse, and Michelle Cheng (5th year Masters thesis). (Wesleyan undergraduate co-authors are in bold; ** indicates graduate student authorships.)

5. How is recombination initiation coordinated with homolog alignment and SC assembly in budding yeast? It is known that Spo11-mediated DNA double strand break (DSB) formation is required for the pairing of homologous chromosomes and assembly of synaptonemal complex (SC) between homologous chromosomes during meiosis, and that earliest SC assembly (synapsis) events occur predominantly from (homologously paired) centromeres. However, the molecular mechanism(s) that couple DSB formation with centromere pairing or SC assembly remain unknown. In this study, a Wesleyan Ph.D. student, Lina Yisehak, employed the sequence-specific endonuclease, HO, in a spo11Δ strain as a tool to explore models for how DSB formation might lead to homologous synapsis in budding yeast. Lina found that, unlike Spo11-mediated DSBs, artificial DSBs are incapable of promoting two major features of meiotic chromosome alignment, centromere pairing and SC assembly in meiotic cells. Lina also discovered that (unlike Spo11-mediated DSBs) the processing of artificially-supplied DSBs in meiotic cells is not constrained to utilize a set of meiosis-specific proteins associated with DSB repair, including the Dmc1 recombinase and Red1 axis protein. These data suggest that Spo11 is specialized in promoting the homolog alignment processes that normally accompany recombination initiation during meiosis. (** indicates graduate student authorships.)

6. How do chromosome axis proteins influence meiotic DNA repair and checkpoint signaling? We used structured illumination microscopy to contribute to two different investigations carried out with collaborators V. Subramanian, T. Markowitz, A. Hochwagen (NYU) and their co-authors. These studies report important molecular aspects of the relationship between chromosome axis proteins, interhomolog recombination factors, and the assembling SC in budding yeast. We contributed to this study by providing a detailed characterization, using superresolution microscopy, of the molecular arrangement of SC components in mutants where SC appears to assemble despite chromosome axes exhibiting features associated with synapsis failure, and in mutants carrying sub-threshold levels of a chromosome axis protein. 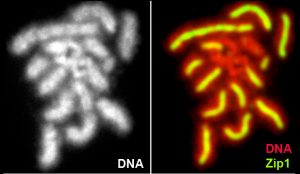